Fondazione Roma’s Art Collection is comprised of a substantial and original corpus of works ranging from the fifteenth century to date. Based on the original small nucleus that belonged to the ancient pawn broking institution, Mount of Piety, and the savings bank, Cassa di Risparmio di Roma, the Collection has been considerably expanded through a series of new acquisitions purchased over the years, as firmly requested and promoted by the Professor Emanuele, who also had the idea of gathering and permanently exhibiting the works in galleries created for the purpose in Palazzo Sciarra.

Several private collections belonging to Roman galleries that derive from the estates of great families have remained intact over the centuries by means of trust agreements, which, whilst avoiding dispersal, imply that these collections are ‘closed’. Conversely, the wise and successful series of new accessions that continue to increase the original nucleus distinguish Fondazione Roma’s Art Collection.

This Collection is centred mainly on artists active in Rome, in order to add new important tesserae to the extraordinary mosaic composed of Rome’s artistic heritage. The core of the Collection is composed of works belonging to the late Baroque and Marattesque culture and in the local museum environment has even become known as one of the most representative picture galleries of the Roman figurative period between the seventeenth and eighteenth century.

Various paintings, including works by the principal contemporary artists who for various reasons have been connected to the capital city, significantly represent the ensuing centuries.

Finally, the collection is enriched by four hundred specimens of the Foundation’s numismatic heritage, composed of approximately 2.500 medals and coins, the most substantial and impressive part of which is the series of Papal medals starting from Pope Martin V, born Colonna, to Pope Francis. The collection reflects six centuries of the history of Roman Catholic Papacy and, due both to the number and quality of the specimens, may be considered second only to the Vatican Library’s Medagliere. 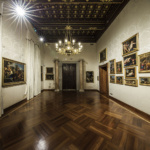 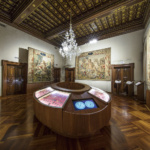 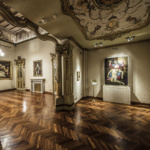